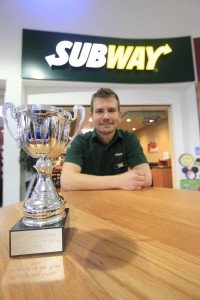 Congratulations to David Csillik, manager of Subway at Cornwall Services. He has just been named Manager of the Year, beating off competition from 26 other stores.

When he’s not busy running a fantastic food outlet, he is training for his forthcoming 300 mile charity bike ride. On Easter Sunday he and a friend will be hopping on their bikes in Datchworth (Herts) and cycling 300 miles to St Austell (Cornwall) in aid of Cornwall Hospice Care. The feat would take them 4-5 days and is in memory of a family member. There is a charity box in store for all those customers who would like to support David, or you can donate online here: www.cornwallhospicecare.co.uk/appeal/datchworth-to-st-austell-cycle-ride